Just back from a gastro-tour of France. This time by bike (Horatio the Harley) as part of a much needed break after such a busy and fun summer, cooking great food for fantastic clients. So – an early start for Portsmouth to catch the fast Sea Cat crossing to Cherbourg – followed by 10 days of tasting, drinking, buying fresh and unusual produce, cooking and visiting out of the way small local restaurants including little known French truck stops. I predict these humble establishments will be the next big thing in France – try the one on the N12 – between Ernee and Fougeres if you ever get a chance. But all good things come to an end – after much laughter and sharing of food with French and English friends and hard work in the garden of one friend – I had a two day ride back to Calais via Rouen. Horatio behaved and all in all it was a great trip with the added bonus of the discovery of wonderful new food ideas for the Deli Truck – including what could be a winter favourite – pork loin, roasted-off and finely sliced – slices then dunked in steaming hot onion-chassuer sauce and piled high in a buttered crispy crunchy baguette. 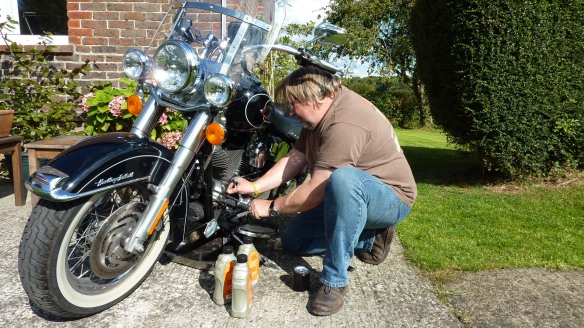 A full service for he Harley before departure. Typical HD. Its takes 3 different oil changes.

Street food – French Style – a truck at he Ernee Fete serves Toulouse Sausages cooked over charcoal. We’ll be doing this next summer on the the Deli Truck. A lot more of our food will be cooked directly over flaming charcoal. Can’t beat the flavour

A stop of at the Harley Davidson shop in Le Mans for a coffee and chat and some oil. Wonderful welcome. 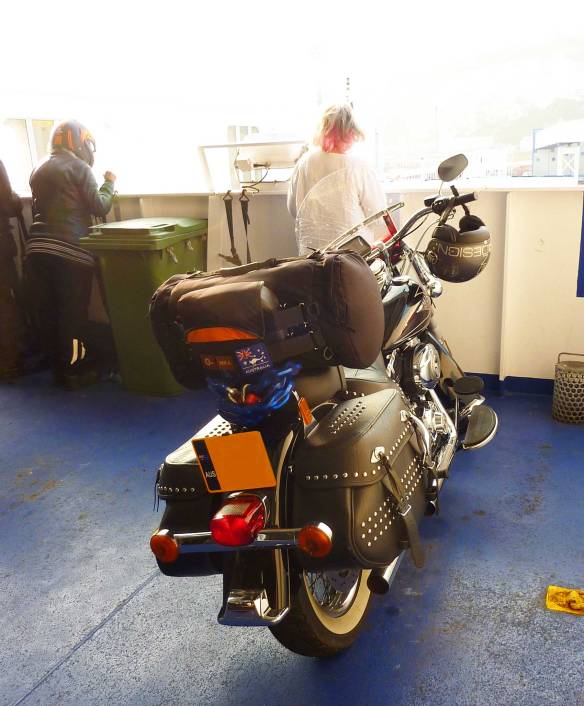 On the boat back to Blighty after a fabo ten days in France.