The Deli Truck has just received a five star rating after its last health and safety check from the Sevenoaks council. Inspections have been getting tougher and tougher over the last couple of years as councils around the country are cracking down on unscrupulous, badly trained and dangerous food outlets.

We are delighted that the local council recognises the hard work, time and dedication the Deli Truck takes – making sure that it gets its food to its guests as fresh as possible while maintaining high standards of personal hygiene with spotless kitchens and appliances. 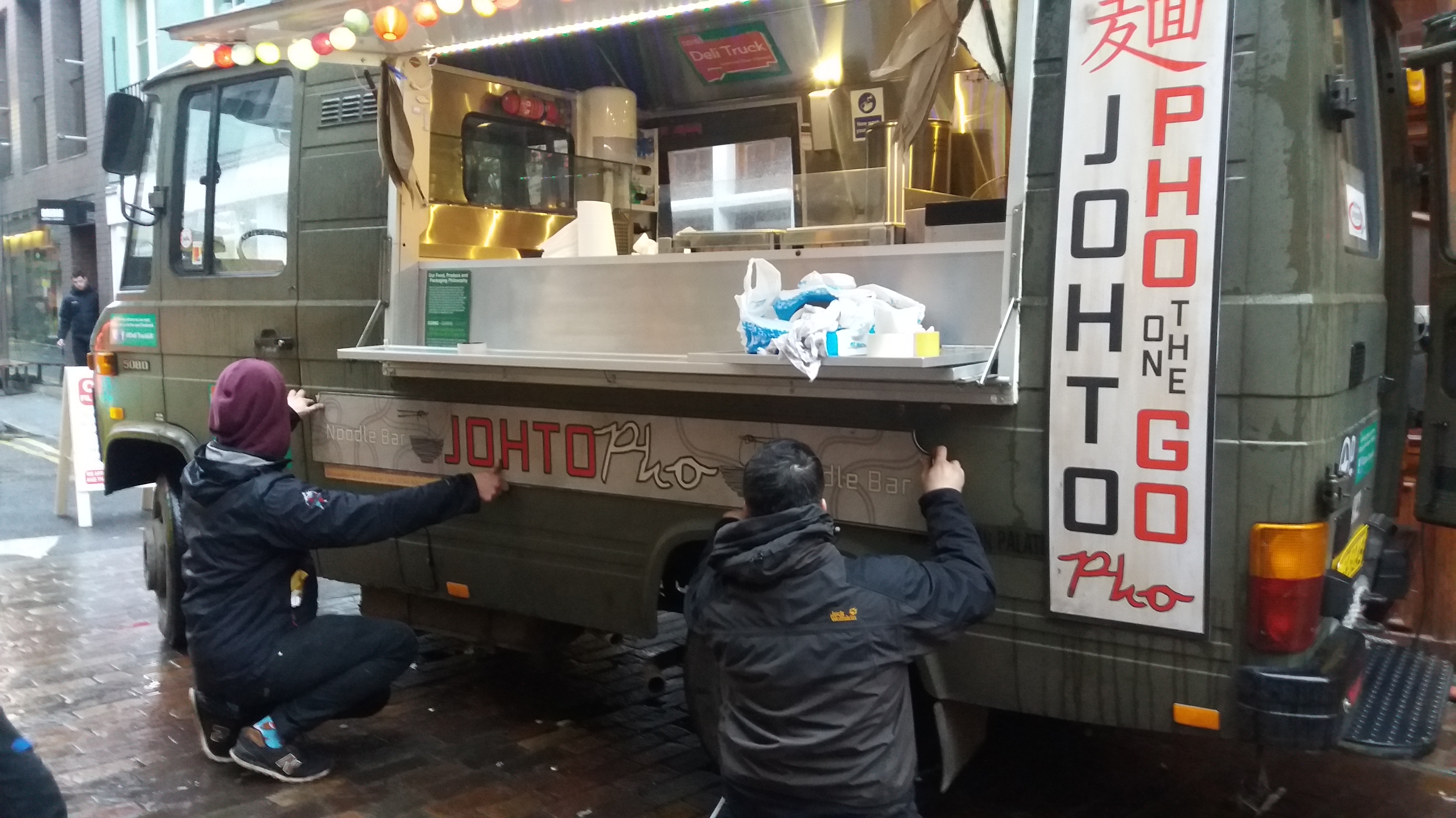 The crew of 800 turned this part of inner London into a mad house for the weekend. Along with their trucks, generators, canteens, star caravans, miles and miles of cables and lots of security they certainly made an impact in an area of London that is usually very blaze and too groovy to be concerned by anything.  And tucked away in this shambolic scene was the good old Deli Truck.

Two entire streets in Shorditch were turned into a dystopian market street in a fantasy city called Ryme -sometime in the future. As soon as we arrived on set, the deli truck was attacked by the props department and turned in a Pho Noodle truck. The detail was amazing they even changed our number plates to match the fantasy city that Shoreditch had become for the weekend. Great to see these guys work so professionally.

To much fake smoke but a great example of street sets

But the movie makers were keeping tight lipped, but they did say this is major movie with principal photography ending in May this year. The props department dressed two entire blocks just south east of Old Street Station with new shop signs with an Asian flavor.

So not only does the Deli Truck rock at doing festivals, weddings, birthdays and bar mitzvahs we are now getting invites to the movies.. 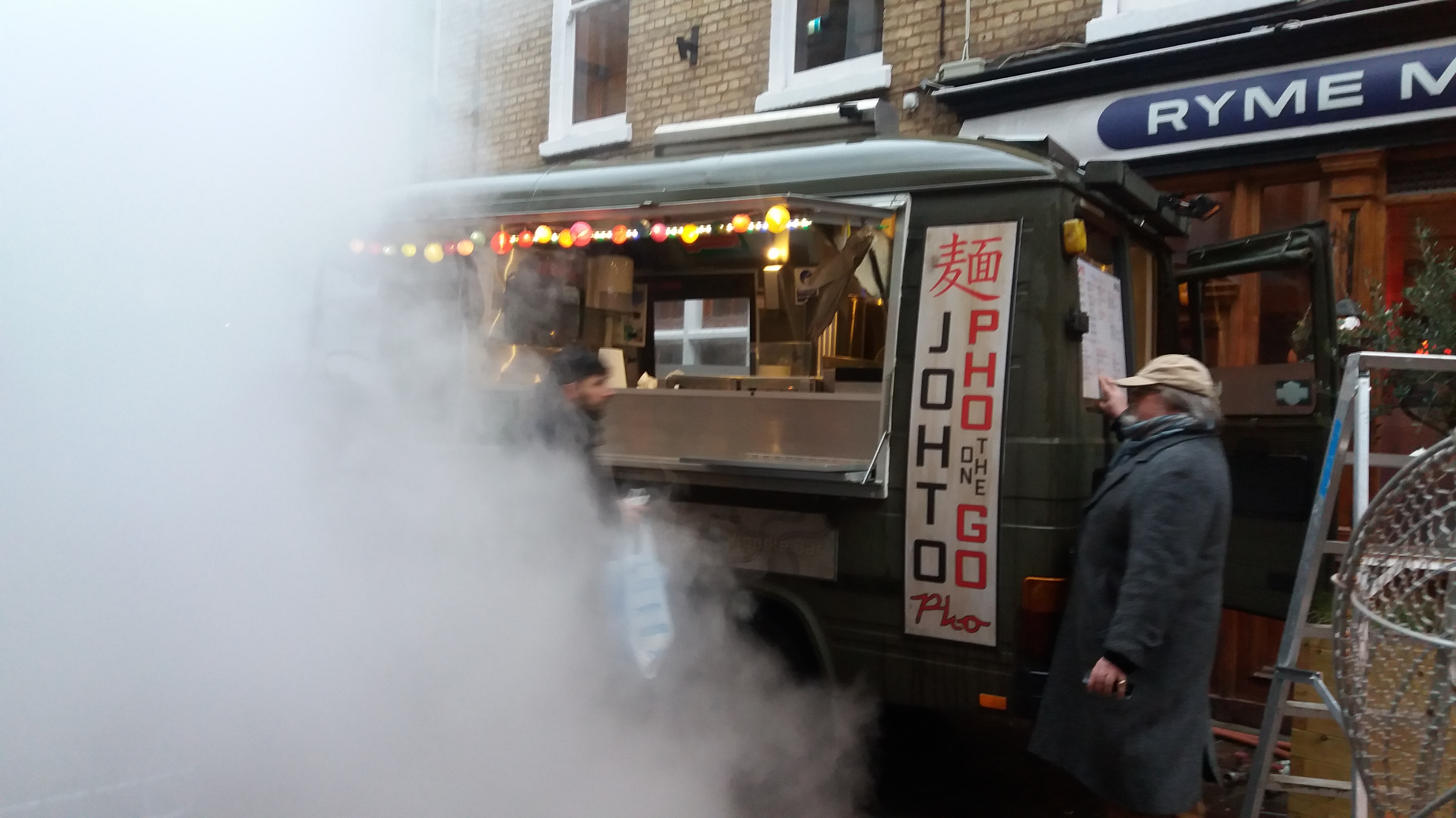 Way to much fake smoke. You can see behind the Deli Truck they renamed a restaurant the “Ryme Marketplace Restaurant” 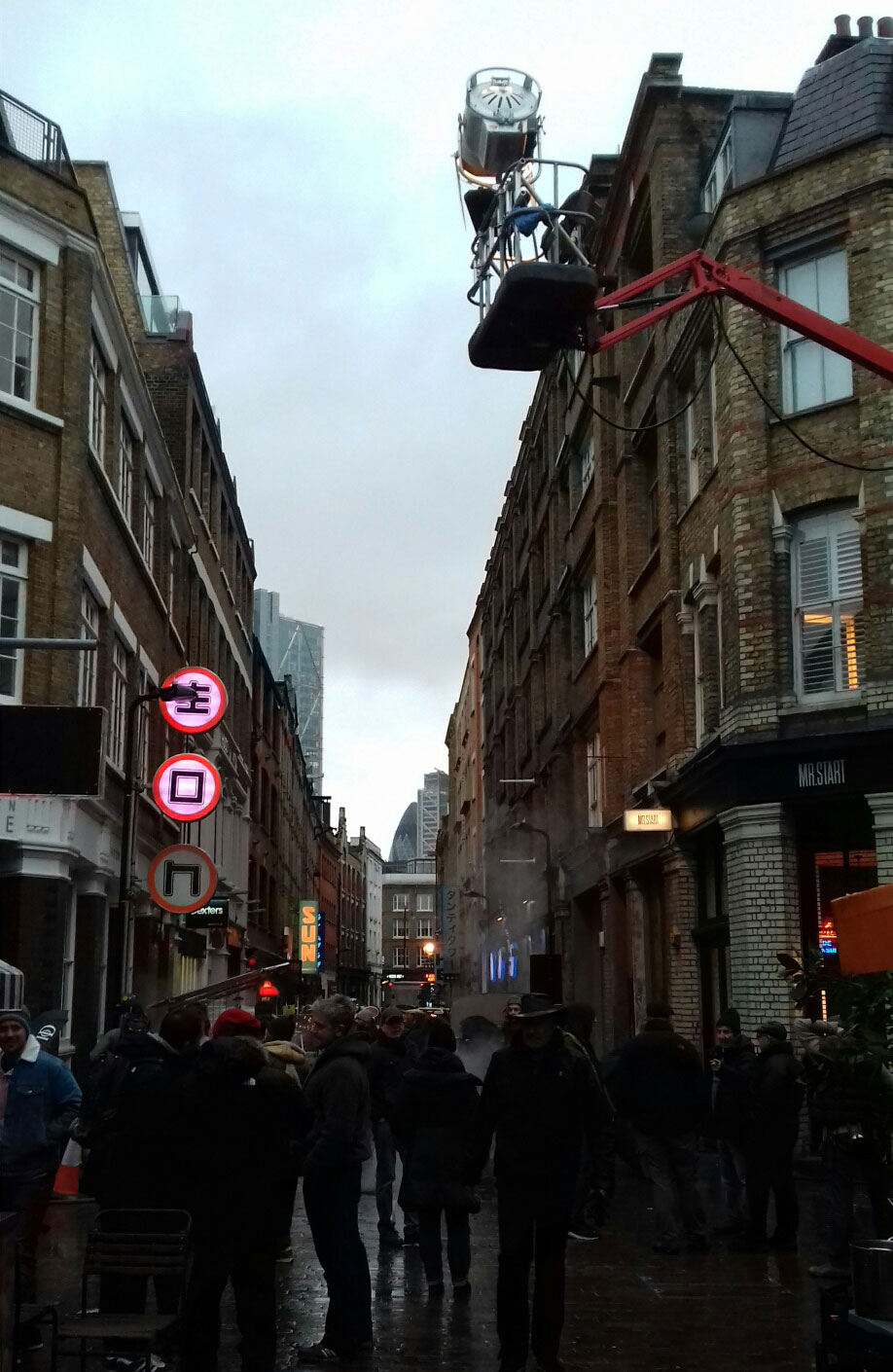 Lighting rigs in the air just beside the Deli Truck 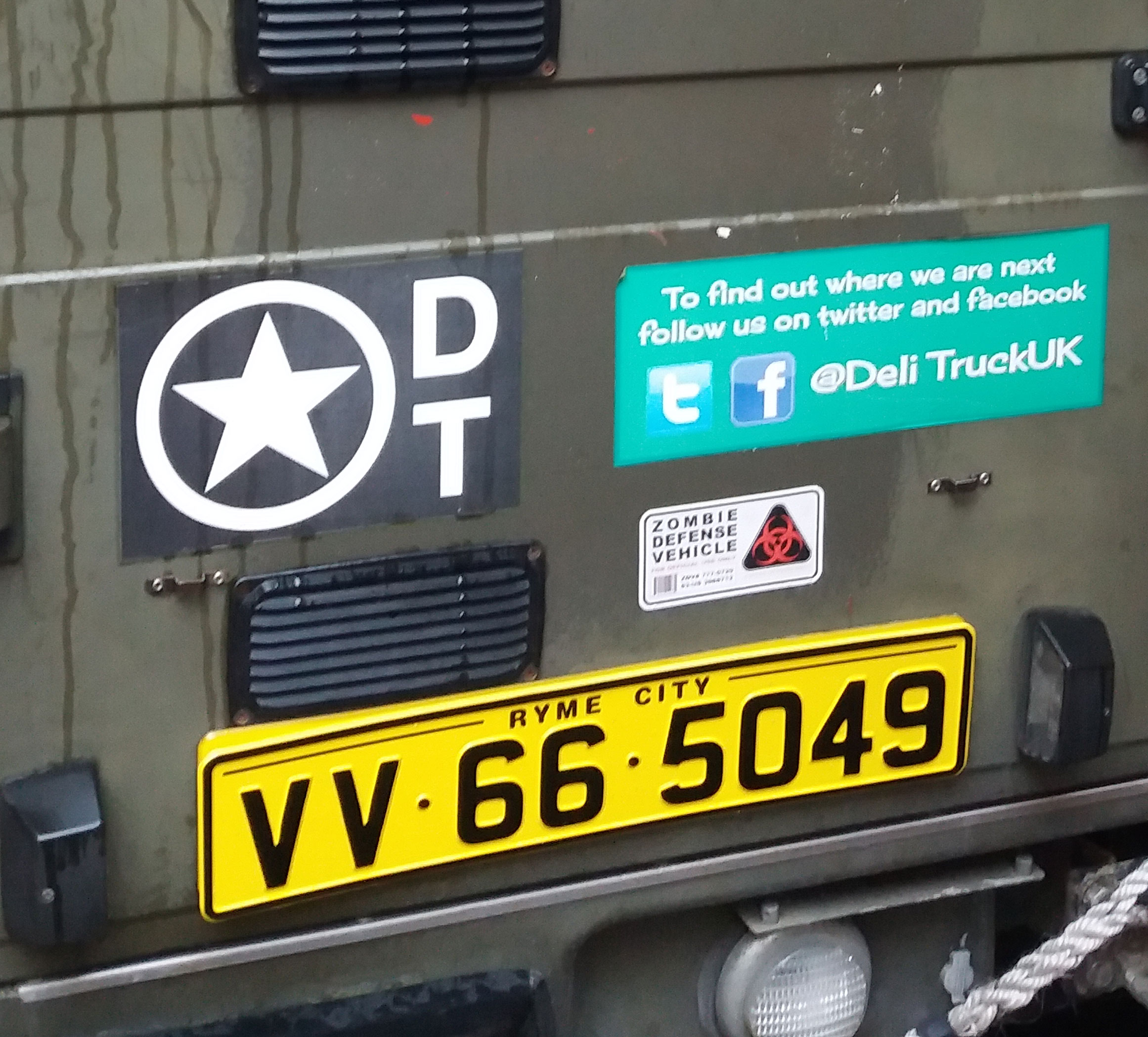 This is not really a story about the Deli Truck, but what follows was such a wonderful foodie experience I have to share this with all and sundry.

We all know that ageing beef is what brings out the flavour and the quality of the meat. We also know that the only form of ageing is dry ageing – hanging in a temperature and humidity controlled cool room for up to 60 or even 100 days, with cool drying air circulating around a large prime cut of beef. Wet ageing in a tough plastic bag, with the air pumped out, is quite simply a revolting way to “age” beef as it has no contact with the air and so relies on anaerobic bacteria to tenderise the meat, which at times, can taste sour and watery.

But very few butchers dry age these days because during this very slow process, the cut of beef looses up to 20 percent of its weight as water evaporates away. This is what makes it more flavoursome and deeply red-brown in colour. Of course the water that evaporates, as far as a butcher is concerned is profit evaporating as well, as the weight of the cut decreases. This is the reason so many butchers will not dry age.

But on the few occasions that I have eaten properly air dried aged beef (I like it at about 40 days) it is a true revelation. The raw meat actually smells sweet, the all important fat is white but translucent and the entire cut has a wonderful nutty cheesy flavour and the good bacteria has done its job and slowly broken down the connective tissue and produced a super tender very very tasty steak.

The next thing that happened is that a few steak houses in the USA (notably David Burke’s Prime House in Chicago) started ageing their beef in cold rooms with a wall of Himalayan salt bricks stacked to the ceiling. This had a couple of profound effects on the beef – firstly the salty air being circulated around the large fridges has a slight anti-bacterial effect which means the beef can be aged for a longer time and secondly the salt produced a stronger drying effect and bizarrely a sweeter piece of meat. Recently a small number of UK meat producers have decided to salt dry as well.

The beef ageing cellars at David Burkes Primehouse in Chicago. These ageing rooms are stacked with Himalayan Salt bricks.

So onto my special beef day – Late last week my foodie wife came home from a pre-Christmas visit to Fortnum and Mason with a 1 bone prime rib cut of beef from shorthorn cattle, off the Glenarm Estate in Northern Ireland. But here’s the revelation, the Glenarm Estate has started to age its beef with Himalayan salt bricks. This is not just sophistry – salt ageing really works. The beef smelt sweet and fresh with a slight mushroomy cheesy nose. The meat was dark and the fat translucent.

Prime Rib from shorthorn cattle on the Glenarm Estate in Northern Ireland. This piece has been aged in a salt room for 28 days.

It was such a special piece of meat that I didn’t want to mess it up by overcooking, so I seared on top of the stove on all sides then put the pan in the oven at 180 for about 8 minutes. I put a temperature probe into the meat and pulled it from the oven when the core temperature reached 50 degrees. With a normal, supermarket, wet-aged, flaccid bright red steak this would be too rare – but in this piece of meat (after a 20 minute rest) this proved spot on. The ageing process had, to my eyes, part cooked the beef already. This was a wonderful special treat and a truly exceptional piece of beef. Well worth the trip to Fortnums to track down.

It’s also very expensive – this piece cost close to £30 pounds – but like all good things, you dont have to have it every day. I would gladly cut my red meat intake down to 5 or 6 times a year (instead of twice a week) so I could afford the best – and this is it.

NOTE: if you are well versed in cooking steak and use the finger prodding method to feel how it is done – you may have to change your methodology with meat like this. I found with this cut that the meat had lost so much water due to the ageing process that when prodded it felt very firm at all stages of cooking. So when it was very rare (checked with temperature probe) it felt almost well done. Something to be aware of….

NOTE: Always ask your butcher if his meat has been dry aged or wet aged in a bag (called the cryovac method) if it has been wet aged don’t buy it, but kindly ask if he can get dry aged beef. The more people that ask the more opportunity we have for getting better quality meat. 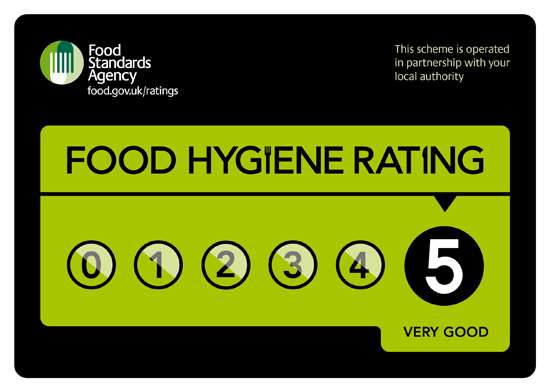