Our first time at Bicester Heritage as a quest of Ludo Parayre who owns vintage car company “Lap63”. Ludo wanted us to feed his clients and potential clients at Bicester Heritages’s first vintage car, bike and plane open day for the year. Despite the cold an amazing number of people turned out to see a fine array of vehicles. I popped around the corner of one building and found three pre 1960’s Ferrari’s sitting in the hazy frosty sunshine – around another corner was a fine collection of historic British motorcycles and in another building a TR7, a Stag and an early 1970’s Porsche Turbo… Sadly because of the overcast the 40 historic aircraft that were scheduled to fly into the former RAF Bicester for the day had to cancel, but they will have another attempt at the next open day in April. We fed over 200 people during lunch outside Ludo Parayre office and showroom space. What a great day. 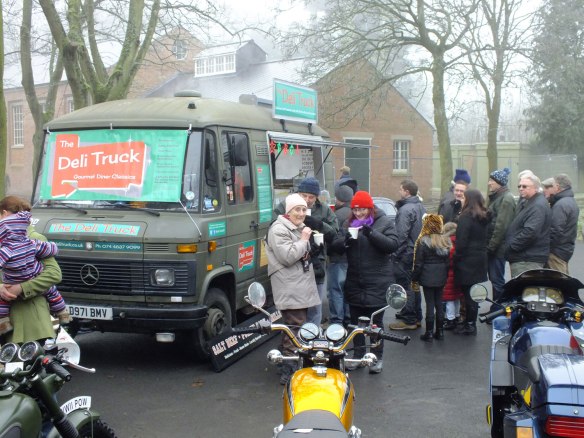 Serving our famous pulled pork sandwich to the crowds